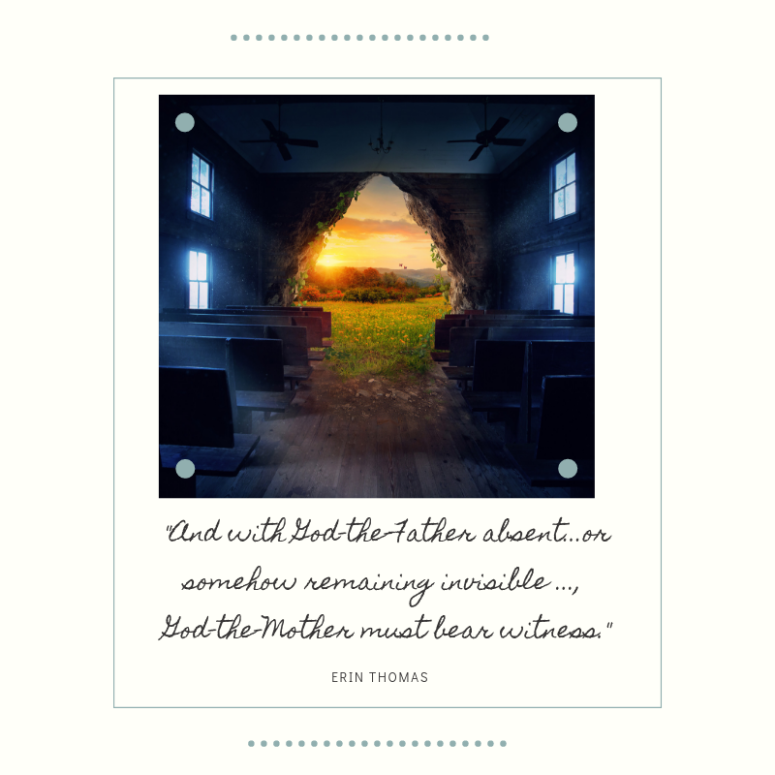 I’ve done it since I was young.

Focus on the absence of God, I mean.

Not that any one group has any precise, theological understanding of exactly what happened the day Jesus was crucified. No one was actually there — in Palestine or in heaven. If that’s where God-the-Father resides.

Which I’ve come to have dubious suspicions about.

We’ve fought wars over what God did on Good Friday. We’ve clung to the power of the crucifixion as redemptive, in awe of the sheer violence of the thing. But in being so consumed with the absurd collision of powers on this day, we have zealously claimed to know what God was thinking, what God was doing, where God was dwelling, and what God was meaning.

If any shame could rival even the actual crucifixion, perhaps it would be just this: our pride in determining such unanswerable questions about God.

These hunched over ladies, grasping for their friend, refused to be hushed by the powers of the world. Their bodies, already determined to be of little worth other than to crank out children and owned by layers of patriarchal flesh, moved to the rhythm of trauma and grief. Resisting the temptation to flee as the men had done, they stepped out into the full light of the bloody day and refused to shut their keening howls down.

“Have some water, my Child,” they whisper.

“We will not leave you, my Child,” they insist.

Only a mother could choose to endure to watch the torture and slaughter of her child. And with God-the-Father absent (apparently?) or somehow remaining invisible (who really knows, after all?), God-the-Mother must bear witness. And so she does. She will not leave, hoping, I imagine, that somehow would simply slaughter her too. If anyone else in the world was dying along with Jesus, it was his mother. She, too, will bear the scars of his death for eternity.

She will not be silenced.

“I will not leave your or forsake you,” she says.

Jesus looked down and saw her — saw her refusing to leave, to companion him until the very end and beyond. And while my children’s bible storybook said that Jesus needed to find another man to look after his widowed mother, my sense now is that the rest of the world needed the love only Mary could give: the love of God in kinship and community.

“Here is your mother…”

For all its ingenuity and insistence, violence is not terribly creative. Only the presence of God could nudge Jesus to recognise such radical kinship: a kinship able to topple empires and the altars of our human egos. God-in-Mary was the flesh and blood incarnation of the crucifixion.

In the presence of Jesus’ mother.

In the woman who would be overlooked by the rest of her own world.

It’s tempting to give up, to give into cynicism and hopelessness. Good Friday was taught to me as the day God hid His face. Yet when I look at the story again, God was in the loud, keening, womanly voices of Jesus’ friends. God was in their companioning, their presence, and their loud declarations that no power could ever shut them up.

That the violence of the cross is redemptive is more than I know. A part of me wants to continue to believe it as such, but another part of me rejects any violence as redemptive. Too many people have suffered and died needlessly over the wasteland of redemption.

The voices of the oppressed, though, who refuse to go down into the annals of false history, cry that God is present. Redemptive or not, God is in the suffering, the loss, the sorrow, the injustice, the poverty, the abuse, the abandonment, the confusion, and the grief. Perhaps I need no other understanding of the cross other than to hear:

Below is the sermon that emerged from today’s musings at our Good Friday service, Trinity Lutheran Church, Edmonton, AB, Canada.