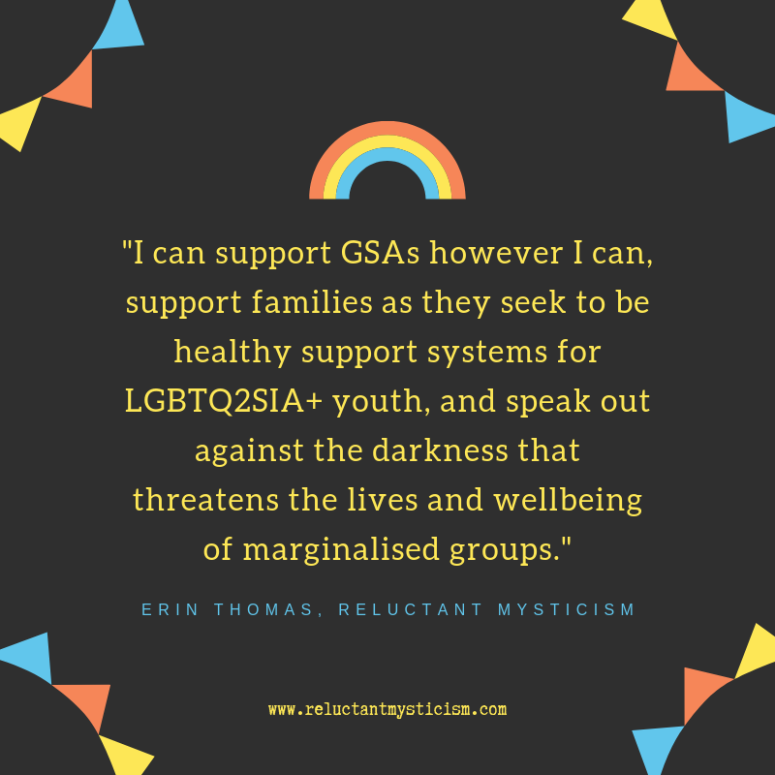 This past winter, Trinity Lutheran Church was host to local filmmaker Mark Koeppen (KTNexus), and video creator Katie Cutting (Big Sky Life, Lazy Kitten Productions), who shot and produced public service announcements for the importance of GSAs/QSAs (gay/straight alliances/queer straight alliances). The political and social climate in Alberta right now is incredibly tense, more so with the provincial election looming on the horizon next week. The need for honest conversation about the impacts of GSAs are desperately needed.

I loved witnessing the flurry of activity bustling in and out of the sanctuary over the few days the film crew was present. Personally, I took comfort in the deliberate choice to shoot the interviews in an historic church. The relationship between religion/spirituality and the queer community is deeply strained — irreconcilable in some places, sadly — so the backdrop of bringing the two communities together was powerful.

The courageous stories shared by the interviewees are inspiring. Cutting through the misinformation about what GSAs actually are, these folks echo time and again that these student-let groups save lives. These spaces are holy sanctuaries youth can flee to when the world seems dead-set against them. I’d like to think I could forget the myth that GSAs are considered to be ‘sex clubs’, but that time has not yet come. With a heavy sigh, I realise that conservative religion still fetishizes sex so much so that any group outside the flock is seen tinged with a colour of pornographic intent.

One day, we will celebrate the end of such damaging teaching.

The junior high and high schools I attended never had GSAs. In truth, they were schools who would never allow such clubs. Good Christians weren’t queer. The sick twist in my stomach reminds me that I likely would have been one of the students lobbying against GSAs had other students somehow been approved to host one. I was taught that homosexuality was a special kind of sin, sin separated people from God, therefore if I supported homosexuality, I was supporting folks being separated from this God of love. Why would I ever dare to do that? It would make me a monster.

It’s hard to describe how difficult life becomes when ‘right teaching’ collides with personal sexuality and orientation. The battle with the soul becomes relentless. On the one hand, I wanted to believe that God never made mistakes so maybe — maybe? — being queer wasn’t so bad?

On the other hand, should I slip off that perpetual slippery slope, I’d be cut off from the love of God. And if I was to be cut off from the very Source of all Love, there would be no way my parents or family or church could ever love me, imperfect as they were. The ever-present terror of a literal, eternal hell also preyed on spirit day in and day out.

How can a child make any kind of wise choice in life with the threat of the loss of love, and the presence of eternal torture hanging over their heads? Any option leads to loss and abandonment and shame. I know now that this isn’t the truth of the situation, but when kids are immersed in such environments, fear and trauma dominate identity and decision-making.

The road to recovery from such abusive environments is long and painful. I can say now that I wish I had a GSA to access when I was younger. But more than that, I wish that teachers and leaders of this amazing, mysterious Christian spirituality that is so ingrained into my DNA would have taught an expansive, embracing, holistic view of love. I wish that there had been a healthier view of sexuality, rather than one of patriarchy, shame, and threat.

As it is, those things didn’t happen for me. What I can do now is be that open, safe space for young and old to come chat with. I can be that presence to walk with folks as they wade through the difficulties of belief and faith intersecting with sexual orientation and gender identity. I can support GSAs however I can, support families as they seek to be healthy support systems for LGBTQ2SIA+ youth, and speak out against the darkness that threatens the lives and wellbeing of marginalised groups.

Thanks to Mark and Katie for your hard work on these beautiful expressions of community and life. May the encourage the defeated, be one of many ways that offer healing to the brokenhearted, and help offer freedom for captives.